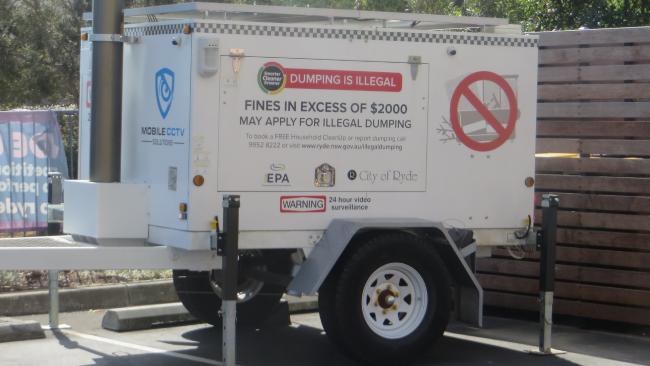 People who dump rubbish in the street face being caught on camera and prosecuted as technology is introduced to end the scourge of illegal dumping. Ryde Council is trialing the use of a mobile CCTV trailer, which is being positioned at dumping hot spots to capture evidence of people leaving bulk waste in parks and streets. Several night-vision cameras, on an extendable mast, record footage from different angles. One dumping incident has already been recorded and is being investigated, while a littering offence has been reported to the NSW Environmental Protection Authority.

The trailer has been positioned at Meadow Cres, Meadowbank, and will be moved to other streets and sites. Another street likely to come under surveillance is Doomben Ave, Eastwood.

Christine Coates has lived there for 13 years and said rubbish was often dumped outside her home.She said steel cabinets and chairs had been dropped in her front garden, among other things.
Ms Coates said the dumping often happened when people moved home.

“It’s Dump Ave,” she said of the street. “People are always doing it. I don’t know why they don’t have any civic pride.”  Ms Coates was hopeful the trailer might make people change their ways. “I think it’s an excellent idea,” she said. “It works at night and that’s when most dumping occurs, under the cloak of night. “Dumping is so unnecessary. People wouldn’t like to come home to their place and find rubbish dumped on their grass.”

A council spokeswoman said the trailer was a vital component of its illegal-dumping reduction strategy. It is supported by its waste team, rangers and EPA funding. The Times in July reported a spike in illegal dumping across the district. The problem costs Ryde Council about $100,000 a year. Illegal dumping carries on-the-spot fines of $2000 (individuals) and $4000 (businesses). If the matter goes to court, the maximum penalties are $250,000 and $1 million.

Sorry, the comment form is closed at this time.